End of the semester approaching and the pressure is on to complete the final assignment. Our set goal is to create a rendered sculpture from wood, meaning I would have to learn the ways of the power tools. Our work is depicting a past memory, and to take that memory and recreate it's story through distorting any realistic figures, or basically any nouns from being obviously visible. Like in my title, five feet and six inches marks completion, (or sleep) for the assignment calls for one dimension to be at least our bodies height.
Feeling out of my element, I had a few failed beginnings, but have found my way on track. Or at least for now I feel that way. Learning the tools of the wood workers has been by biggest challenge, I have seen my father and brother use them my entire life, but never dreamed I would actually be behind a chop saw slicing through eight foot two-by-fours. I'm feeling more confident now that I finally conquered the power drill. Recalculating my measurement and grasping a better understanding of how wood can be sculpted I have come up with a plan. My piece will depict an abstracted tornado, with swirling winds and threatening bends of energy. My piece sets on three one-foot vertical beams resembling the loose gap tornados seem to have between the ground and it's funneled foot. Then, a platform made from 49 degree triangles glued, nailed, and tightened together into a windmill type pattern are thus glued and nailed to the vertical beams.  Following is another set of beams but are cut with a 48 degree slant and are rotated to begin the tornado's first tight bend. This process is carried out five more times with altering bends and similar but gradually enlarging platforms of windmill like patterns. Ultimately, I am planning on painting my tornado with a solid matte finish. The details to be continued. 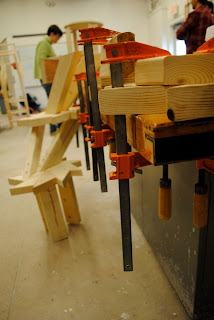 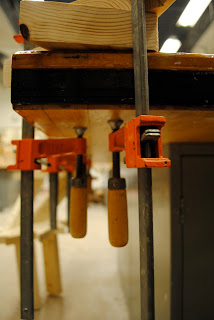 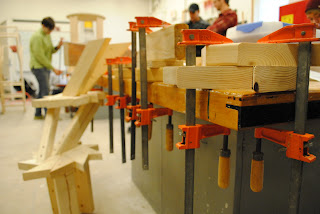 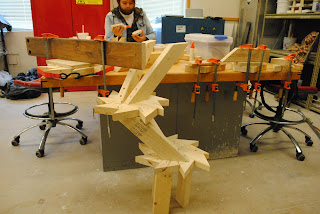 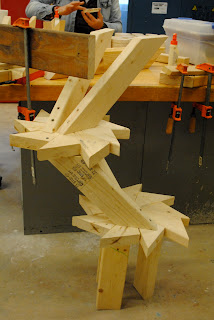 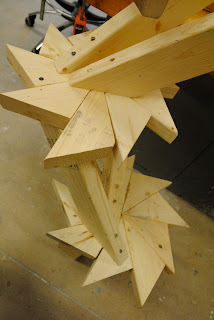 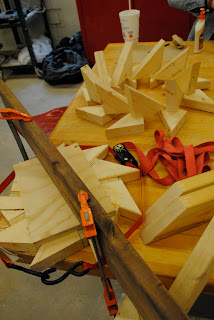