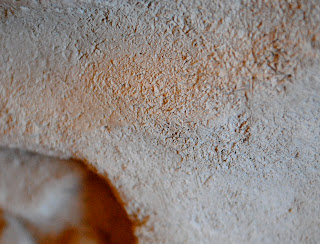 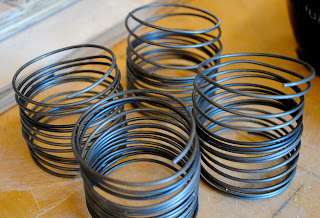 This weeks work has really progressed my sculpture. I have successfully (with many attempts, which cost me some patching of holes) carved out the majority of the feline's head, the ears and eyes are left to brave for next week's challenge.. I have also begun creating, or coiling, the wire spring that attaches between the cat's ears. With the help of my teacher, we conjured up winching a scrap of metal piping to one of the work tables. Consequently coating myself in grease. But, ultimately creating the perfect width as which to begun wrapping the metal around in oder to make a tight coil. The wire quickly became a nuisance, as it would not be controlled by my greasy fingers; lucky for me I wore my glasses that day, otherwise I might have lost an eye. Once again, another winch was applied to the end of the wire, making it much easier to wrap around the metal piping. The creation of the coil spring was a more difficult task than I had imagined, pulling the wire tightly around and around. Eventually I came up with a new approach of making the wire spring in sections, thus, now requiring me to sauder the sections together. I haven't a cue how to do this, but my teacher promised to show me how next week.
Posted by Anna Rutherford at 9/08/2011